Fire Doors – Keeping up with the latest legislation 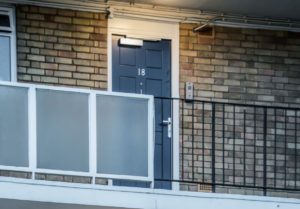 Fire doors play a vital role in keeping residents safe but how can housing providers ensure that the fire doorsets in their properties comply with up-to-date industry standards?

Both companies are suppliers on the Fire Door Lot of our Fire Safety Services framework, procured with Contracting Authority The Hyde Group and sector experts Frankham Risk Management.

Prior to the UK’s departure from the EU, since November 2019, external pedestrian fire doorsets required a CE mark, which signifies that products sold in the European Economic Area meet safety, health and environmental requirements. This has now been replaced with the UK Conformity Assessed (UKCA) marking, a new UK-focused certification mark, which will become mandatory from 1 January 2023.

The UKCA marking currently applies to new, external pedestrian fire resisting doorsets.  For example, a balcony front entrance doorset which is external to a building and fire rated – not to be confused with an escape route or exit doorset with panic release hardware, which is a different product.  This type of doorset provides safe egress from a building in the event of a fire or emergency and does not necessarily need to be fire rated.

For manufacturers, who have already been CE Marking to this standard, the changes relate to the Certificate of Constancy of Performance which is issued by the Approved (formerly Notified) Body. The mark now changes from CE to UKCA, which means that the Declaration of Performance (DoP), which is the legal document under the Construction Products Regulation, must be updated accordingly.

So how can housing providers make sure that fire doorsets installed on their properties are compliant?

Performance for building products is governed by Building Regulations and evidence of doorsets having the requisite performance by testing to recognised industry standards at UKAS test houses is vital. Independent third-party certification is a recognised way of demonstrating performance for internal fire doorsets, whilst UKCA marking applies to external.

UKCA marking for external pedestrian fire resisting doorsets deals essentially with two designated standards that have come together. The first, BS EN 14351-1:2006 + A2:2016, has been in existence since 2013 and deals with thermal transmittance, air permeability, water tightness, resistance to wind load and acoustics. The manufacturer has the responsibility to test for these characteristics to industry standards at UKAS test houses. This is known as AVCP system 31.

The second designated standard is BS EN 16034:2014 +A1:2016 and this deals with fire resistance and smoke control. The Approved Body is responsible for overseeing this standard and this is known as AVCP system 12. 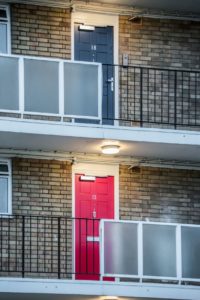 Other aspects of performance required by building regulations, such as security, are not covered under the UKCA marking. To consider Approved Document Q housing providers need to look at Dual Certification criteria for fire and security (which is what Secured by Design call for). For operational performance this is also covered separately under the test standard BS6375-2.

It is useful to note here that the key document for the housing provider is the DoP and not the CoCoP, which is supplied by the Approved Body for the manufacturer. The CoCoP is the document that enables the manufacturer to include fire resistance and smoke control criteria into its DoP.

The recently introduced Fire Safety Act, which amends the Regulatory Reform (Fire Safety) Order 2005 with the intention of improving fire safety in multi-occupancy domestic premises, has also had a significant impact on the fire door sector.

It has helped to bring clarification to a lot of previous grey areas said Chris, not least which types of properties risk assessments are required for, and where within those buildings risk assessments need to be carried out.

“The Fire Safety Order in 2005 was an amalgamation of around 40 different bits of legislation and there were, let’s say, grey areas to it,” he explained. “With the Fire Safety Act, in terms of fire doors, there’s quite a bit of clarity.  First and foremost, it clarifies what type of buildings the landlord needs to assess risk in. Beforehand, it was ambiguous as to external walls and elements within those walls such as doors, and windows, balconies etc but now it clarifies where risk assessments within those buildings need to be taken. So, for the client, it’s black and white and stipulates where you need to risk assess, promoting better fire safety within buildings.”

Under the Fire Safety Act fire risk assessments must be carried out for any house of multiple occupancy, so that is a building with more than one property or dwelling in it, and fire doors must be regularly maintained. Although there is no clarification of what is meant by “regular.”

“The Fire Safety Act introduced an amendment to the Regulatory Reform (Fire Safety) Order that where a building contains two or more sets of domestic premises (multi-occupancy) then Responsible Persons must now also review fire risk assessments for external walls and flat entrance doors in addition to the communal areas and implement a suitable system of maintenance,” explained Fiona. “This is helpful for housing providers, as it removes the ambiguity surrounding the responsibility of the Front Entrance Door which is now placed within the risk assessment and must be compliant. Previously Front Entrance Doors, if not up to standard, could contribute to rapid fire spread and impact upon means of escape.”

A fire doorset needs to conform to a range of performance criteria outlined in the Approved Documents of the Building Regulations, from fire resistance and smoke control to security and impact resistance.

“To assist housing providers, properly tested and certified doorsets suitable for their location and function is the best way forward. Fire doorsets may not just need to perform in terms of fire resistance and smoke control, but are likely to require other functionality as well,” said Fiona.

Chris explained that the introduction of regular assessments is likely to lead to increased vigilance when it comes to maintenance of fire doors and the onus is on the housing provider or landlord to ensure that there is quality within the procurement process, rather than just a focus on price.

Housing providers can check with manufacturers to see if their current fire doorsets are compliant and should have a register, which carries the information of every fire door they’ve got in each building.

“They should use their asset register but also look at their programmes, when they’ve last carried out fire risk assessments etc, and then use the Fire Safety Act to enforce regular assessments or FRA programmes to review these doors on an ongoing basis,” explained Chris.

“The Fire Safety Act enforces the need for the regular assessment of doors which will ensure that the client either maintains compliant doors or if there are non-compliance issues they go back to someone like the manufacturer to get that door maintained properly.”

Regular maintenance and inspections programmes will play a crucial role in picking up issues such as the misuse of fire doorsets by residents.

“Fire doors are probably the only part of the building which is crucial to compartmentalisation that the residents have frequent interaction with,” explained Alfie. “We’ve seen doors wedged open, we’ve also seen doors where the door closer is not fit for purpose causing it to slam, so buffers have been attached and these stay there until the door is maintained or inspected and the issue is resolved correctly.

“If you’ve got a responsible inspection and maintenance programme and the company you’re engaged with has experience and has got the correct operatives doing the work, it may be that after the second inspection, you can identify to the client that these doors are being wedged open and then you can target the correct resident engagement. For example, if a door is servicing four flats and it is always wedged open, the chances are it’ll be one of those four. Is it because the door is a nuisance? Or is it because the door is unsuitable? It’s going to be one of the two. It’s not going to be because they like it wedged open.

“The problem is that it’s an asset that residents have interaction with and it is an asset that isn’t being managed, so without inspections things like that go unnoticed.” 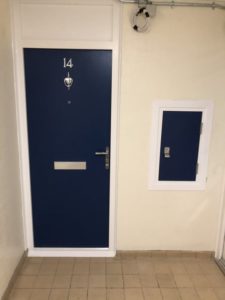 An external fire doorset supplied and installed by Shellen

As with any legislative changes, the evolving regulatory landscape for fire doors brings its challenges, and the increased inspections, and therefore maintenance of fire doorsets will have financial implications but ultimately this will lead to safer homes for residents.

“I think that if it’s handled and approached correctly, there could be situation where it might be a little bit more expensive, but it means the quality of client’s buildings, and the residents’ lives and their safety is enhanced dramatically,” said Alfie.

“But it has to be the right approach. If they go down the wrong approach, it might be cheaper in the short term, but undoubtedly will be more expensive every time there’s an issue.”

“Ultimately, it boils down to fire safety and saving lives,” added Chris.